How We Got to IIoT

I get that question a lot these days as IIoT becomes one of the few bright spots in technology.  Given COVID-19, it’s obvious that capital expenditures as well as massive layoffs and furloughs have rocked industries all over the world, and not in a good way.  The bright spot, however, is that spending on automation has held up, and in some companies has increased as they seek to position themselves for “the new normal.”

But what is IIoT?

One way to figure out the answer is to go back to basics.  IIoT stands for “Industrial Internet of Things”, meaning it’s not about home consumer IoT such as Ring doorbells or Nest thermostats, or Amazon Alexa.  Its what the Europeans call “Industry 4.0.”  But to understand that, we need to go back into history a bit.

Industry 1.0 was what we call ‘the age of industrialization.’  It was turning Medieval craft manufacturing into manufacturing by machine.

Interestingly, the first programmable machine, what we would call a “replaceable logic machine”, wasn’t the Babbage Inference Engine – it was the Jacquard Loom.  The loom used these wooden cards, about the size of a small 5 x 7 piece of wood, and it had holes punched in them. 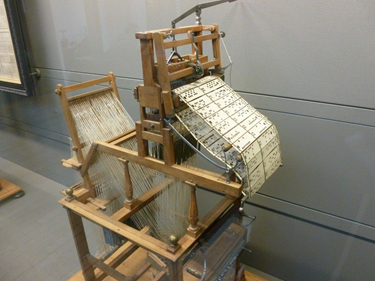 The cards were linked together in a large circular chain, and were fed into the machine.  The Jacquard Loom is controlled by a chain of multiple cards punched with holes that determine which cords of the fabric warp should be raised for each pass of the shuttle. The ability to store and automatically reproduce complex operations found wide application in textile manufacturing. But what was cool about this was that by changing the cards, or the order of the cards, different weaves could be obtained!  In the early 20th century, these became “punch cards” (invented by Herman Hollerith of IBM).  So that’s the industrial revolution: manufacturing by machines powered by steam, coal, dead dinosaurs.

The 2nd Industrial Revolution involved the development of methods for manufacturing interchangeable parts and the invention of the Bessemer Process to produce steel.  The Second Industrial Revolution is generally dated between 1870 and 1914 (the beginning of World War I).  It enabled mass deployment (and hence cost reduction) for things such as the telegraph, railroad networks, clean city water supplies, and thousands of other mass-produced items.  Perhaps of even greater significance is the development of electrification – of everything.  Mass produced lights opened up the evening to productive as well as entertainment purposes, just to name one significant change brought about by this 2nd Industrial Revolution.  But if that’s not important enough, how about bicycles and automobiles?  Handcrafted automobiles turned into Henry Ford’s assembly-line built Model T’s and Model A’s.  Kettering invented the electric starter for cars, and it was mass produced to remove the crank from cranky automobiles.

The Third Industrial Revolution, or Industry 3.0, is the Digital Revolution.  No more analog!  Oh sure, we had lots of “ages” in between the Industry 2.0 and 3.0:  Machine Age, Atomic Age, Jet Age, Space Age.  But all of those still used Industry 3.0 techniques – mass production of similar products using interchangeable parts.  Industry 3.0 is COMPUTERIZATION of manufacturing.  The transistor evolved into the integrated circuit, and then Very Large Systems Integration (VLSI), semiconductors, computers, the internet, and perhaps unfortunately social media.

But now we get to Industry 4.0, the subset of the fourth industrial revolution that concerns industry. The fourth industrial revolution encompasses areas which are not normally classified as an industry, such as smart cities, for instance.  The first mobile radio phone, developed by Motorola, is now a capacitive touch, voice-enabled computer that, parenthetically, can also make <yawn> phone calls.

Although the terms "industry 4.0" and "fourth industrial revolution" are often used interchangeably, "industry 4.0" factories have machines which are augmented with wireless connectivity and sensors, connected to a system that can visualize the entire production line and make decisions on its own.  Thus, Industry 4.0, and IIoT, is characterized by machine-to-machine communication, usually without human intervention, and machine learning so that automation can be controlled almost entirely by the machines themselves.

Industry 4.0 fosters what has been called a ‘smart factory’. Within modular structured smart factories, cyber-physical systems monitor physical processes, create a virtual copy of the physical world and make decentralized decisions.  This is sometimes called Digital Twinning.  Why we need fancy words for simple concepts eludes me, to be honest – but whatever.  The concept is pretty simple:  for every asset that is being managed such as factory equipment, there is an equivalent in the software.  If there are 5 sensors on a machine, there are five virtual sensors in the model in the software.  In the past we called this modeling, or simulation.

Over the Internet of Things, cyber-physical systems communicate and cooperate with each other and with humans in real-time both internally and across organizational services offered and used by participants of the value chain.

OK, so that takes care of the history lesson.  Today, CAT-APM, our Connected Assets Technologies used for Asset Performance Monitoring is the software that takes in sensor data, analyzes it (even on the Edge, which really improves responsiveness and decreases latency) and then feeds this to what we call a ‘single pane of glass.’  Executive and Operational Dashboards can signal alerts when something goes out of whack, or provide predictive and preventive maintenance data so that NOTHING goes out of whack – or so you can service the machines when its convenient for you, not at 3:00 am on a Sunday when the pump breaks, or the pressure is too high.

That’s really what we’re bringing to companies:  cost effective asset monitoring that doesn’t tie you down to any one specific asset class.  The software is useful to monitor any type of asset for any type of condition.  We have Oil and Gas Energy Production, Wind Energy Production, Building Automation, and Industrial Manufacturing/Machinery Automation applications, and there is really no limit to what can be done as long as you collect enough data, the right data, and use IIoT to optimize the process.  We take a little of the 3rd Industrial Revolution – statistical process control – and teach the machines to talk to each other.  The machines notify their human owners or operators when something requires attention.

In order to make this situation viable, the adventurous customer used to have to assemble IIoT technologies and expertise themselves, learning software programming for industrial computers using strange machine-focused languages. Now, at Corvalent, we’ve taken the pain out of the process.  We are your contact and support, and we manage the project from inception to deployment and testing.  Our battle-tested platform software, our advanced software applications that are customized for your needs, running on our incredible Corvalent industrial computers using the best sensors in the business will not only automate your business or process into the 21st century, but it will help you save money, open up new possibilities for revenue sources, and keep you out of trouble.

Want to learn more about IoT and IIoT? Save your spot at our next webinar!

← Our Clients, Our Heroes in the front line of war against COVID-19 Corvalent Announces CAT-APM IIoT Demonstration/Evaluation Kit →