A Simple Explanation of What Internet of Things (IoT) Means

Those of us who have been in embedded computing for a long time realize that there is very little under the sun that is truly “NEW!”  Maybe it’s my Engineer’s cynicism but every time I hear about a new buzz word, my head rings with – well, a buzz.  “Cloud Computing” sounds a lot like “off-premises server farms for rent” to me, for example.  Or “the Internet”.  Or “monitors or PC’s connected to the Mothership.”

You may have heard of the latest:  IoT, or Internet of Things.  IoT is very similar to past generation’s “distributed computing”, but with a twist:  instead of people using computers, it’s really about machines communicating with other machines.

The Internet has historically connected machines and people to share files, human communications, and spam.  IoT is connecting “things” (sensors, end-points) that communicate with each other as well as with people.  IoT = Embedded Computing + Networking + Servers (on-premises, Cloud, whatever) + Analytics + AI Decision Making (optional).  It is a networking of sensors devices monitoring things like water pressure, temperature, the amount of oxygen in your blood (SPO2 meters), whatever real world “thing” needs monitoring, gathering up that data (often times in real-time or near-real-time), and doing something with that data.

Sometimes this “do something” means crunching the data locally on edge computing devices and running it through a simple or, increasingly, an artificial intelligence rules engine that can make decisions quickly (“turn off that valve NOW!”).  Often the data is sent off to the Internet to be stored in databases, analyzed, and presented to operators to take action, with some application of AI technologies to automate decision-making.

Our research shows that IoT, and especially Industrial Internet of Things (IIoT), is at a tipping point – the point where it goes from marketing hype to really solving real-world problems.  It’s no longer just buzz, it’s real and it’s being implemented using a mixture of old and new technologies.  For example, in the Oil, Gas, and Alternate Energy fields, monitoring the oil field or the energy collection site requires a lot of people, it can be dangerous, and is crucial to maximize yields while being compliant with environmental laws.  IoT is being deployed by real energy companies looking to improve monitoring, reduce risk, reduce costs, and improve yield. 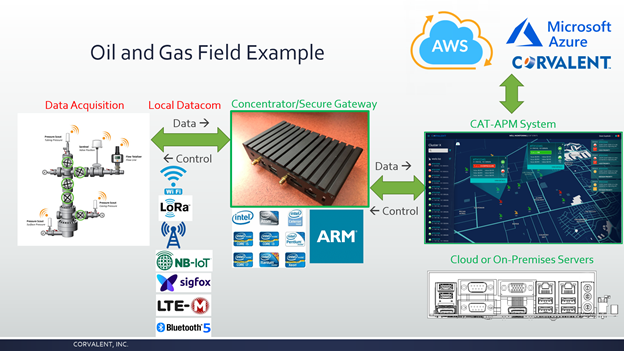 Corvalent has more on Intelligent IoT applications, but the most important news is that we take this very seriously for our customers.  In the coming months we’ll explore how our battle-tested technologies are turning IoT into a huge cost-saver for customers all over the world, and how it can help your operations.  In the meantime, if you have any questions, feel free to reach out to me at alan.weiss@corvalent.com

← Elon Musk reveals plan to create technology that allows a merging with AI I’ve been to the Edge: Internet of Things (IoT), Fogging, Artificial Intelligence (AI), and Edge Computing →